Jack Dennis is one of the Fly fishing professionals who really has done it all. Jack founded sporting stores, ski shops, fly fishing guiding operations, and a book and video company during 47 years in the business in Jackson Hole, Wyoming. First as a guide, then an author of the best selling Fly tying books ever (over 600,000 books) which led to a video and DVD collection of over 50 titles. Jack has hosted TV shows on 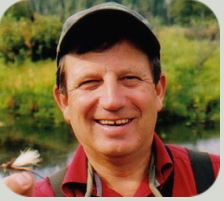 First as a guide, then an author of the best selling Fly tying books ever (over 600,000 books) which led to a video and DVD collection of over 50 titles. Jack has hosted TV shows on

Jack has hosted TV shows on ESPN, FOXsports, Outdoor Life and ABC. He has coached the USA fly fishing team in world competition, lectured at sports shows, fly fishing clubs, and was an advisor for fly fishing travel development for the governments of Australia, New Zealand, Argentina, Chile, and Canada for over 35 years. He has literally fished around the world in every continent except Antarctica.

Jack founded the Jackson One Fly event some 29 years ago, which has donated over 10 million dollars to stream restoration. As Chairman of the successful US Wild and Scenic Headwaters Bill, Jack created a legacy beyond fly fishing, providing environmental protection to over 25 wild trout streams and rivers. Federation of Fly Fishermen awards including “Legend of Fly Fishing” and “International Ambassador “ and Outside magazine named his fly fishing outfitters the best of the best.

He taught and has taken fishing US presidents, prime ministers, Senators, Supreme Court justices, movie stars, sports figures, musicians and a host of foreign dignitaries, authors and people from all walks of life.

As a lover of the fly cast, Jack has helped in developing many fly fishing products from flies, waders, clothing, float boats, leaders, fly lines and especially his first love, fly rods.

There are no upcoming events at this time.