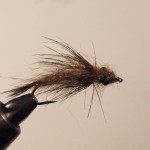 1.   Lay down a thread base on the hook back to slightly past the point where the hook bends.

2.   Tie in large mono nymph eyes about ¼ of the way back from the hook eye

3.   Tie in 1 piece of lead wire along each side of the hook.  Each piece should be tied in behind the eyes and extend back to the point where the tail is tied in slightly past the hook bend.

4.  Wrap thread back slightly past the hook bend and tie in a tail of brown hackle fibers.

5.  Dub a body of dark brown fur of your choice.  Dubbing should cover the back 2/3rds of the hook shank.  I like to mix a little sparkle in with the dubbing.

6.  Tie in and wrap hackle.  The hackle can be your choice of  dark brown hackle, brown dyed grizzly hackle, large grouse hackle, or brown pheasant feather (shown in picture of fly).

7.  Dub the remaining 1/3rd of the hook shank, figure 8 dubbing around the mono eyes to cover the thread tie in point.

8.  This fly can also be tied in Olive or a light brown/cream color (which simulates a recently molted nymph).

I have found this fly to be very effective for bass and panfish.  It will also work well for trout in lakes and rivers.  I will often add a small micro split shot if I need to sink it a little deeper than what the fly would sink with the weight tied in on the fly underbody.  This fly can also be tied in as a dropper with a small bass or a panfish popper.  I usually retrieve this fly with two shorts strips followed by a short pause.  Most hits are on the pause when the nymph sinks a little.