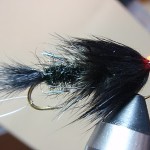 This is a Bear Andrews pattern that I learned to tie at his tying class last spring. His claims to it’s effectiveness convinced me to tie them up to use for last year’s steelhead run and I had good success with it. It is a bead head wiggle-nymph pattern and I tied them in black with orange, chartruese, and pink bead heads. Tie some up for the upcoming run and give them a try!

(Click on photo to see a full size photo)

Tie the trailing body first. Tie in the tail of Pheasant rump feather marabou or a pinch of pine squirrel fur. Wrap a body from a dubbing brush or dub one using Ice Dub dubbing. Then tie in a pheasant feather by the tip and wrap 3 -4 times. Finally tie in the aftershaft feather and wrap to make a fluffy collar. You have tied a sparrow nymph. Now slide the bead on the front hook and tie in a piece of mono behind the bead. Bind down well, slide the trail fly on the mono, form a loop and bind down the mono again with thread. Tie in the squirrel strip at the bend of the hook and coat the thread with Fishermans glue or superglue. Wrap the squirrel strip to the bead, bind down well and whip finish.

There are no upcoming events at this time.